139 ° IPU ASSEMBLY IN GENEVE 514-18/10/2018): The Committee concluded that the case was highly political and that Mr. Diomi Ndongala’s fundamental rights had been violated 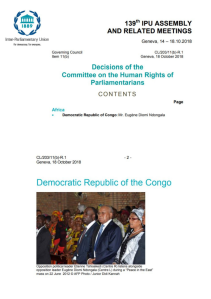 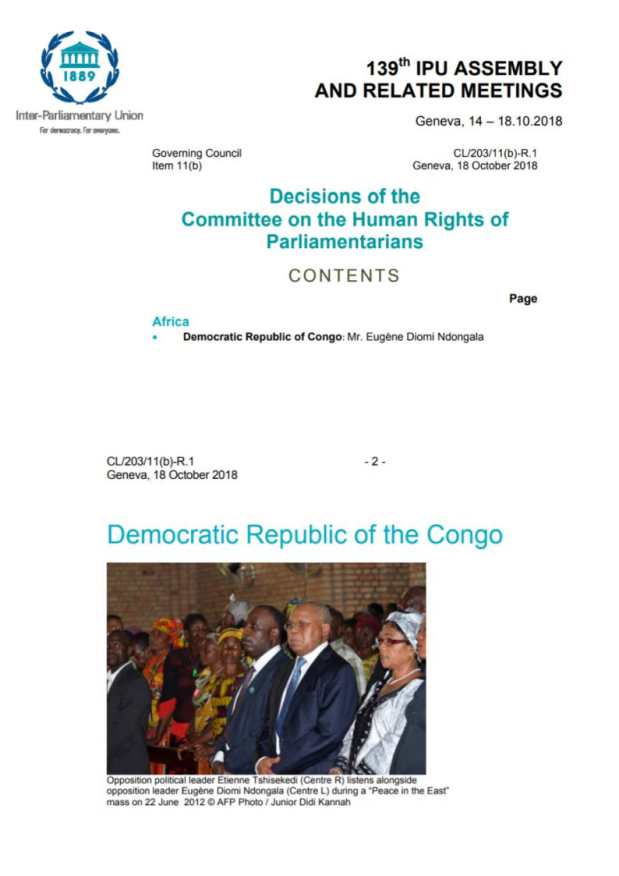 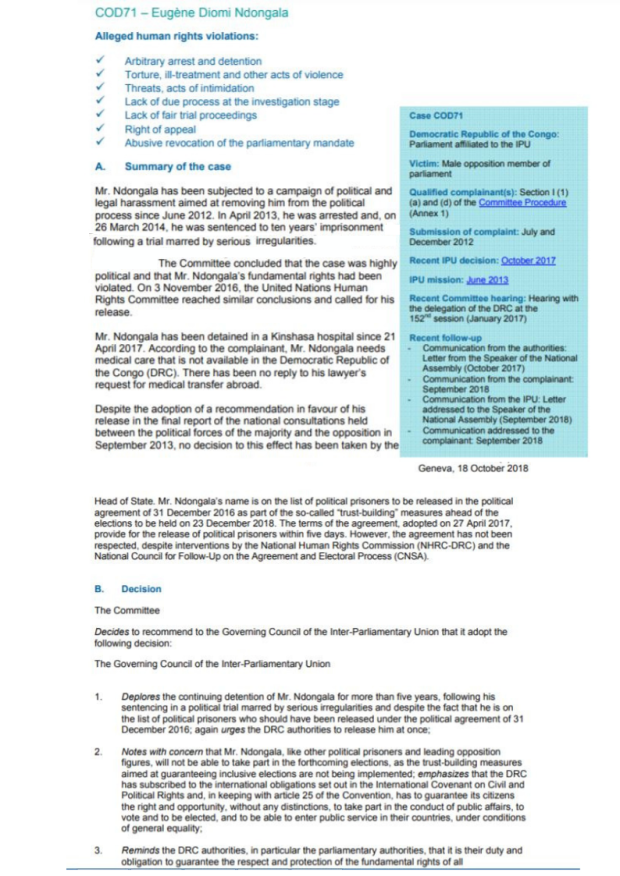 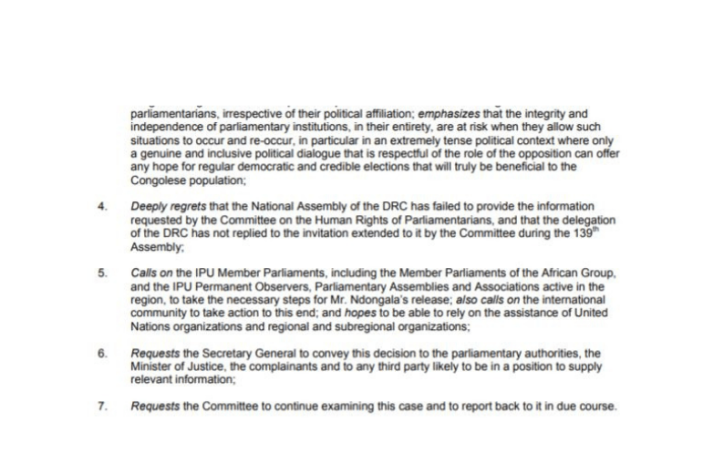 139 IPU ASSEMBLY AND RELATED MEETINGS Decisions of the …

Opposition political leader Etienne Tshisekedi (Centre R) listens alongside
opposition leader Eugène Diomi Ndongala (Centre L) during a “Peace in the East”
mass on 22 June 2012 © AFP Photo / Junior Didi Kannah
COD71 – Eugène Diomi Ndongala
Alleged human rights violations:
 Arbitrary arrest and detention
 Torture, ill-treatment and other acts of violence
 Threats, acts of intimidation
 Lack of due process at the investigation stage
 Lack of fair trial proceedings
 Right of appeal
 Abusive revocation of the parliamentary mandate
A. Summary of the case Mr. Diomi Ndongala has been subjected to a campaign of political and legal harassment aimed at removing him from the political
process since June 2012. In April 2013, he was arrested and, on
26 March 2014, he was sentenced to ten years’ imprisonment  following a trial marred by serious irregularities.

The Committee concluded that the case was highly
political and that Mr. Ndongala’s fundamental rights had been
violated. On 3 November 2016, the United Nations Human
Rights Committee reached similar conclusions and called for his
release.
Mr. Diomi Ndongala has been detained in a Kinshasa hospital since 21
April 2017. According to the complainant, Mr. Ndongala needs
medical care that is not available in the Democratic Republic of
the Congo (DRC). There has been no reply to his lawyer’s
request for medical transfer abroad.
Despite the adoption of a recommendation in favour of his
release in the final report of the National Consultations held
between the political forces of the majority and the opposition in
September 2013, no decision to this effect has been taken by the

Head of State. Mr. Ndongala’s name is on the list of political prisoners to be released in the political agreement of 31 December 2016 as part of the so-called “trust-building” measures ahead of the elections to be held on 23 December 2018. The terms of the agreement, adopted on 27 April 2017, provide for the release of political prisoners within five days. However, the agreement has not been respected, despite interventions by the National Human Rights Commission (NHRC-DRC) and the National Council for Follow-Up on the Agreement and Electoral Process (CNSA).
B. Decision
The Committee
Decides to recommend to the Governing Council of the Inter-Parliamentary Union that it adopt the following decision:
The Governing Council of the Inter-Parliamentary Union
1. Deplores the continuing detention of Mr. Ndongala for more than five years, following his sentencing in a political trial marred by serious irregularities and despite the fact that he is on the list of political prisoners who should have been released under the political agreement of 31 December 2016; again urges the DRC authorities to release him at once;
2. Notes with concern that Mr. Diomi Ndongala, like other political prisoners and leading opposition figures, will not be able to take part in the forthcoming elections, as the trust-building measures aimed at guaranteeing inclusive elections are not being implemented; emphasizes that the DRC has subscribed to the international obligations set out in the International Covenant on Civil and Political Rights and, in keeping with article 25 of the Convention, has to guarantee its citizens
the right and opportunity, without any distinctions, to take part in the conduct of public affairs, to vote and to be elected, and to be able to enter public service in their countries, under conditions of general equality;
3. Reminds the DRC authorities, in particular the parliamentary authorities, that it is their duty and obligation to guarantee the respect and protection of the fundamental rights of all parliamentarians, irrespective of their political affiliation; emphasizes that the integrity and independence of parliamentary institutions, in their entirety, are at risk when they allow such situations to occur and re-occur, in particular in an extremely tense political context where only a genuine and inclusive political dialogue that is respectful of the role of the opposition can offer any hope for regular democratic and credible elections that will truly be beneficial to the Congolese population;
4. Deeply regrets that the National Assembly of the DRC has failed to provide the information requested by the Committee on the Human Rights of Parliamentarians, and that the delegation of the DRC has not replied to the invitation extended to it by the Committee during the 139th
Assembly;
5. Calls on the IPU Member Parliaments, including the Member Parliaments of the African Group, and the IPU Permanent Observers, Parliamentary Assemblies and Associations active in the region, to take the necessary steps for Mr. Ndongala’s release; also calls on the international community to take action to this end; and hopes to be able to rely on the assistance of United Nations organizations and regional and subregional organizations;
6. Requests the Secretary General to convey this decision to the parliamentary authorities, the Minister of Justice, the complainants and to any third party likely to be in a position to supply relevant information;
7. Requests the Committee to continue examining this case and to report back to it in due course.